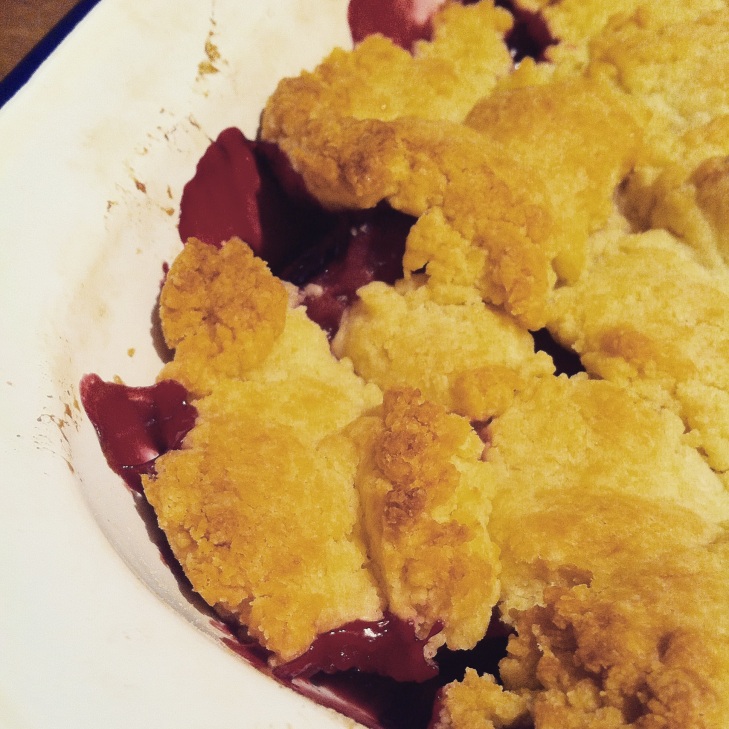 Plum cobbler has been the only Lois recipe so far that didn’t work the first time. I used the cobbler recipe from Good Food, which resulted in a cobbler that wasn’t sweet enough and very heavy and scone-like. The second attempt used a recipe from Lois’ book Dinner at Home and produced a lighter and more biscuit-like cobbler topping. The plums bubbled up and formed a jammy-syrup around the cobbles of biscuit dough and looked quite frankly adorable. Most importantly, it tasted sensational; the plums slightly tart and topping had a shortcake quality to it. Sunday night pudding at its finest.

Lois’ original instructions are to roll out the dough, cut into shapes, and layer over the fruit. I don’t doubt that this would look lovely, however to my mind cobbler is in the same pudding genus as crumble, i.e. one that you can throw together at a moment’s pudding whim with a minimum of implements (and therefore dishes) involved. So I simplified things. Plus, with the effort saved on rolling the dough you’ll have time to run up to the dairy for ice cream.

Plum cobbler (adapted from Lois’ recipe in Dinner at Home)

8-10 red fleshed plums, cut in half and stones removed

Place fruit into a high-sided baking dish and sprinkle with flour and sugar. Put in 180°C oven and bake for 15 minutes while you make the cobbler topping.

Put all ingredients into a food processor and process until crumbly. Tip mixture into a bowl and knead with your fingers – you should be able to create clumps (cobbles, if you will) of dough that will stick together. Take these clumps and flatten them out slightly in your hands and arrange over the fruit in a fairly messy way with the cobbles overlapping and some bits of fruit sticking out. Neatness is not the point here. Put the cobbler back into the oven and bake for about 30 minutes, until the cobbler topping is brown and the plums have bubbled jammy juice around the edges of the dish. Serve hot with a scoop of vanilla ice cream.